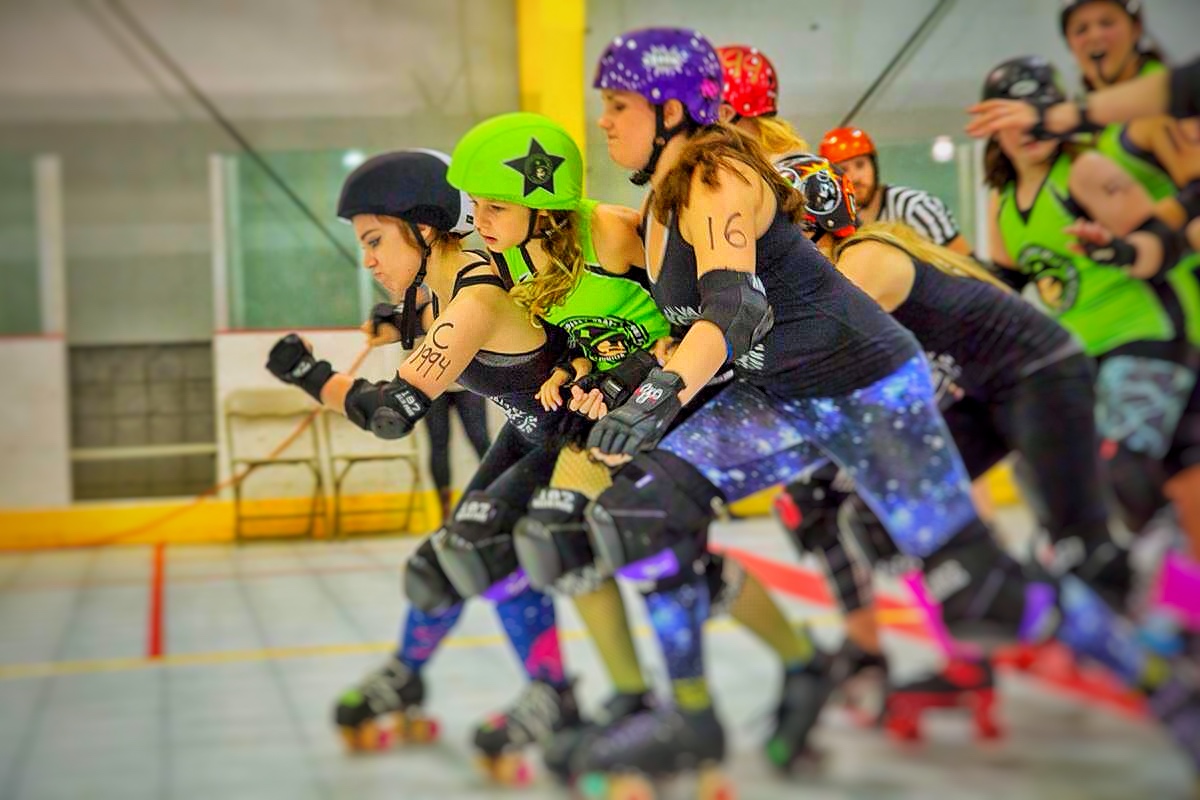 Piper Martin has been skating in circles for years—and, she loves every minute of it. Kanawoy.com sat down with Piper and asked some questions about Flat Track Junior Derby. The community-based sport has had a team in Charleston since 2013. Until that time, there was only an adult team in Charleston. Now the sport is available for a variety of skills, ages and interest levels. Q. How did you get started in Derby?
A. My stepmother, Erin Hart, has been skating in the adult league here for a long time. She met my father when I was in the third grade. I became interested in learning to play after attending her practices. I skated before and after the adult team practices and visited the rink in my spare time. After three years, I could skate well enough to play competitively, but being 12, I couldn’t play with the adult team for multiple reasons, including my size and skill level. Luckily for me, they decided that was a good time to create a junior league, something the team had been wanting to do for a while. I’ve now been skating for seven years. The Chemical Valley Junior Derby was the first junior derby team in West Virginia. We started the team in early 2013, and we have about 15 players today.

Q. Where do you compete? Do groups from other places come here? If so, where?
A. We have bouts at various other rinks and venues out of town, often a civic center or warehouse. In Charleston, we have bouts at the Charleston Civic Center. Groups do come here to play us, most recently, the Huntington team in September, and a mixed-team scrimmage including Lexington and Pittsburgh skaters was held at the Grand Prix.

Q. What are three basic things I need to know to watch and understand a bout/scrimmage?

1. There are two types of players: jammers, the point-scoring players, and blockers, the players who prevent them from scoring.

2. Each team provides five skaters to play in a jam: one jammer and four blockers. One blocker from each team is a pivot, and the group of blockers is described as the pack. Blockers gather together in walls and formations, using each other as support. They use their wheels to grip the floor as the jammer pushes through the wall. Their ultimate goal is to slow that jammer down.

3. Jammers wear a star helmet cover, and pivots—the leaders of the pack—wear a stripe. Jammers score points by passing opposing blockers. One point is scored per blocker passed. Jammers can only score points after their first pass through the pack. The first jammer to complete this initial pass and break though the pack is designated lead jammer. This means she can “call off the jam” by repeatedly placing her hands on her hips. This ends the jam and stops any points from being scored, restricting the opposing team. The team with the most points scored in two half-hour periods is the winner. Q. How physical is this?
A. This is an extremely physical sport. It is much more physical than soccer or basketball. A general rule for blockers in the pack is to touch two people at all times. Blockers create complex formations to prevent jammers from breaking through the pack and stealing their points. They block the jammer’s path with their bodies, and if the jammer can’t find an easy way around, which is rare unless you are an extremely nimble jammer, she must make significant contact with the blockers to remove them from her path. There are constant collisions, whether it be the jammer pushing through or her blocker hitting an opposing blocker out to help her through.

Q. Are there injuries?
A. In any full-contact sport (think football) there are injuries. Most commonly, skaters receive heavy bruising, but sprained ankles and knees are a close second. One specific rule prevents many injuries, though, that being the fact skaters cannot make contact with an opponent while skating in the opposing direction. All skaters must be moving in the direction of the game—counter-clockwise—to make contact. This prevents the car-crash collisions seen in football.

Q. Is Derby more popular in bigger cities?
A. Derby is a grassroots sport, but it is growing. There are hundreds of teams across the country. In large cities like New York, teams are often more powerful but play on the same plane as our team, meaning we could almost certainly arrange to play them. That’s something I love about this sport.

Q. Why is it fun?
A. I am very competitive. This sport is not for people who aren’t. It’s fast, it’s complicated, and it’s intense. It is extremely strategic. I could spend hours explaining every rule and how teams utilize it. It can be played by any body type. It’s hard to find a shape that isn’t useful in derby. The game can be played in an infinite number of ways by just about anyone willing to work at it. Q. What do spectators cheer the most about?
A. Apex jumps. That’s when a jammer avoids the pack by jumping over the corner of the infield in a turn. It’s pretty spectacular. Also, big hits. When a blocker absolutely nails a jammer out of bounds with her hips, the audience can almost feel the poor jammer’s butt hitting the floor.

Q. What would the biggest misperception about Derby be?
A. We don’t punch each other. This isn’t wrestling. We don’t pull each other’s hair or elbow each other in the face. That’s how you get ejected from the game. There are strict rules when it comes to hitting, including what parts of your body you can use and where on your opponent’s body you can hit. Arms and legs are not weapons in this game. Hips and shoulders, however, are. We love each other. This is a tiny sport. We can’t afford to despise the team we’re playing. We hug before the whistle and we high-five after.

Q. Where can I learn more?
A. The WFTDA website has all the information you need. You can stream bouts live at wftda.tv or access past bouts on YouTube, which I highly recommend, or contact our team. Both the adult and junior leagues have Facebook pages and web sites that will allow you to contact us.