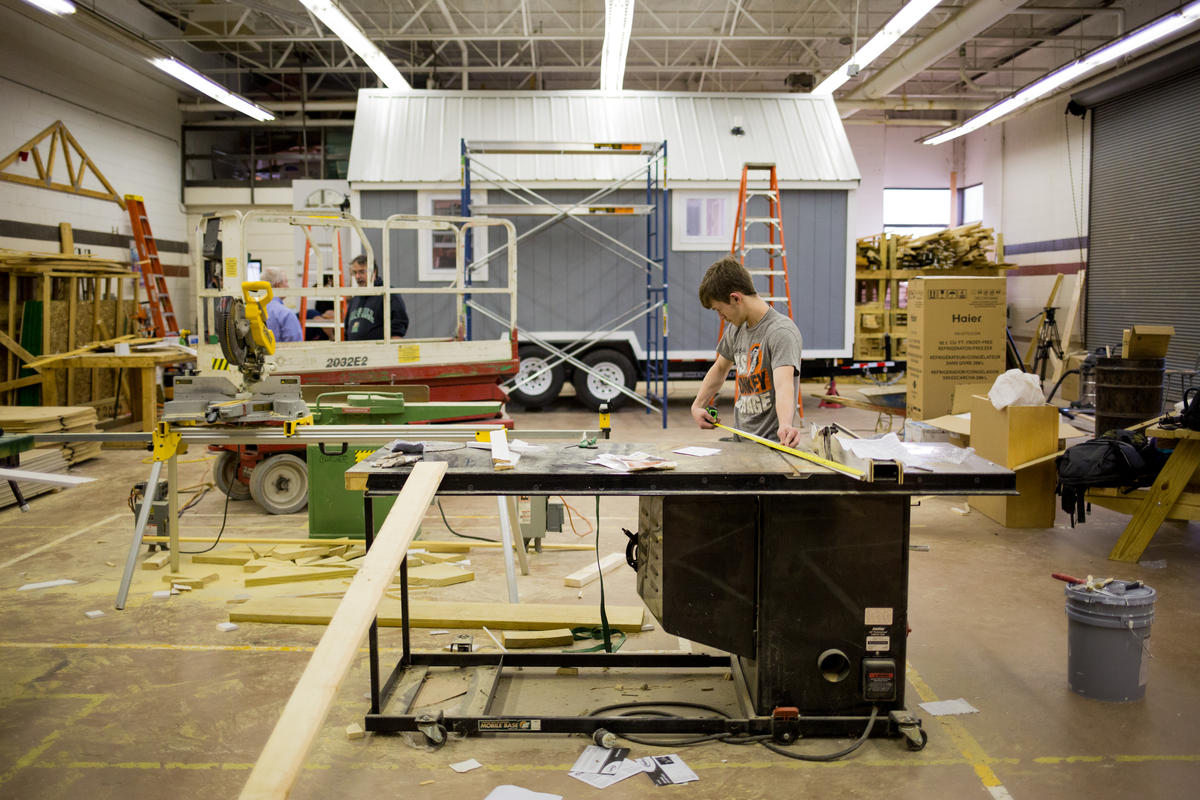 Ten tiny homes lined up in two rows at the National Guard air base in Charleston recently. West Virginia high school students built the homes for victims of the June, 2016, historic flooding who were still struggling to find adequate housing.

The idea was that instead of vocational students building birdhouses or shelves – they could use the skills they were learning in class – carpentry, electrical work, plumbing, welding – to help out local families.

“I was very concerned that folks in West Virginia were still suffering even though all the press had gone away — just like there’s a new story, there’s a new day,” said Kathy D’Antoni, West Virginia’s chief officer for career and technical education. Twelve vocational schools received $20,000 for the project from the state board of education.

“And it’s a killer time frame for these schools,” she said. “Takes normally 4-6 months to build a tiny home, they’ve done it in 9 weeks.”

It should also be noted that all the tiny homes projects also received significant support – both financial and labor – from the schools’ communities.

Most of these homes – there are 15 total – are less than 500 sq. feet, but are designed to house two-six people. For reference, the average American home is about 2,500 sq. feet according to the U.S. Census Bureau.

“Up here’s the loft that’s where they sleep, that’s where the hot water tank stays, then right here’s like your living area, your living quarters, then you have like your fridge right here, your stove’s in there – they’re working on that right now,” said Dakota Carte, one of the students who worked on the project at Carver Career Center in Charleston.

We were standing in the house’s living room during one of the last days of production. The space also served as a kitchen, dining room and bedroom. All in all the structure was little bigger than a generous walk-in closet.

But it’s much better than what many of the recipients lived in all summer.

Rivers is a retired nurse who lived in her home beside the Greenbrier River for 18 years. During the flood, she, her dog and cat evacuated in a tiny camper to a neighbor’s driveway up the hill. There was 6 inches of mud on the floor and watermarks 2 feet up the wall when she returned to the house several days later.

She said after the flood she thought she might be able to clean up and move back in. But it quickly became evident that just hosing the mud off wasn’t an option. Not only was the foundation knocked off kilter, she said, but the mud hardened to a concrete-like substance that had to be scrubbed, rather than sprayed, off.

“We had to carry everything out and put it in a dump truck…so my whole life was like thrown out there,” she said.

Rivers was unable to find rental property that would take her dog or allow her to sign a month-to-month lease so she moved her camper onto the back of her daughter’s property and lived there for the summer – moving into the living room when it became too cold to continue living outside.

She said living with her daughter and five grandchildren permanently isn’t a great option – the kids are homeschooled and it’s a pretty chaotic house, she explained.

The hope was that the flood victims would be in the homes by Christmas. That goal was not quite met – partially because although a majority of the homes were finished before the holiday, the local relief agencies still needed to coordinate building a concrete foundation for the homes. They also needed to make sure that electric, water and sewer hookups were available, which is a bit of a longer process. Rivers said she hopes to be in her new home within a week or two, though. When all that is ready, the local National Guard will transport the structures to their new locations.